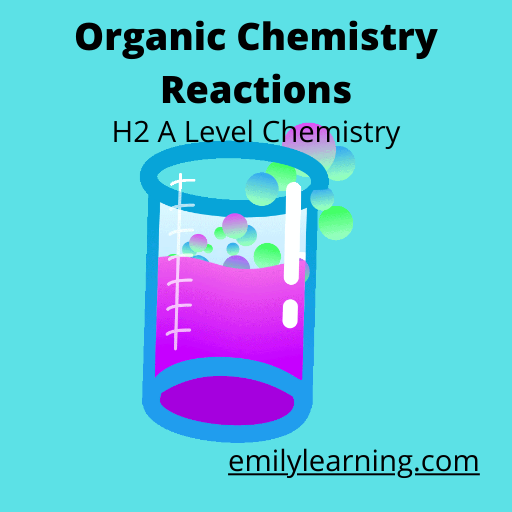 You can click on the link below to go directly to the reactions in the chapter you are interested in below:

The functional group with the least number of reactions you need to know for H2 A Level Organic Chemistry is alkane. Basically just one reaction – free radical substitution with halogens.

Alkanes react with halogens (e.g. chlorine, bromine) in the presence of uv light (or heat) to form halogenoalkanes. Multiple substitution may take place.

B. A. Electrophilic addition of halogens (X2) in aqueous solutions (aq):

A. Combustion (combustion is a type of oxidation, and during complete combustion, the most oxidised state of a compound is formed).

Alkenes undergo complete combustion to give carbon dioxide and water.

When heated with hot acidified potassium manganate, C=C bond cleaves. Depending on what is directly bonded to each alkene carbon, a variety of products could be formed:

B. Reaction with ammonia

The -OH group in alcohols can be converted to -X group (where X is a halogen) by many different reagents which includes:

A. Reaction of alcohols with carboxylic acid in the presence of concentrated sulfuric acid as catalyst, and heat, to form esters (reaction is reversible)

B. Reaction of alcohols with acyl halides at room temperature to form esters. Hydrogen halide (HX) is also produced.

A. Oxidation of primary alcohols

Primary alcohols can be oxidised to aldehydes or carboxylic acids depending on the conditions.

Aldehydes are the “less oxidised” form compared to carboxylic acids.

B. Secondary alcohols will be oxidised to ketones using either hot acidified potassium manganate (VII) or potassium dichromate

C. Tertiary alcohol will not be oxidised by hot acidified potassium manganate (VII) or potassium dichromate.

Iodoform test involves adding NaOH(aq) and I2 (aq) or alkaline iodine to a sample, and heat to test for the following structures:

If the above structures are present, a yellow precipitate of CHI3 will be observed.

A complete balanced equations are as follows:

2. Reaction with alkalis (acid- base reaction)

Phenols react with acyl halides to form esters at room temperature. To speed up the reaction, sodium hydroxide could be added to act as a catalyst.

5. Electrophilic substitution of the benzene ring of phenol

In phenol, the lone pair electrons on O in -OH group delocalises into the benzene ring, making the benzene ring more electron rich and as such more susceptible to electrophilic attack.

Halogenation takes place at room temperature with the absence of a catalyst.

When reaction takes place with halogen dissolved in an inert solvent, electrophilic substitution takes place at room temperature with an absence of a catalyst. However, only mono- substitution occurs. As -OH group is 2-, 4- directing, the halogen goes to the 2nd or 4th position with respect to -OH.

Carbonyl compounds (both ketones and aldehydes) reacts with 2,4-dinitrophenylhydrazine to give an orange precipitate. This test is used to test for presence of carbonyl compounds.

Reaction of carbonyl compounds with 2,4- dinitrophenylhydrazine

Carbonyl compounds can be reduced by the following reducing agent:

Ketones can get reduced to form secondary alcohols

Aldehydes can get reduced to form primary alcohols.

When Tollen’s reagent is added to aldehydes and heated, a silver mirror is formed. This test is used to distinguish aldehydes form other functional groups.

Fehling solution is a solution containing a complex ion of copper (II).

Iodoform test is used to test for a specific structure. We’ve discussed this in the alcohol chapter. You can refer to it here.

In the chapter on carboxliyc acids and derivatives, the focus is on these functional groups: carboxylic acids, acyl halides and esters.

Carboxylic acids can be reduced to primary alcohols using LiAlH4 in dry ether.

Carboxylic acids can be converted to acyl halides using one of the following:

Carboxylic acids react with reactive metals such as sodium to form salt and hydrogen.

Carboxylic acids react with alkalis such as sodium hydroxide to form salt and water.

Carboxylic acids react with carbonates such as sodium carbonate to form salt, water and carbon dioxide.

5. Oxidation for some carboxylic acids

Here’s some reactions for selected carboxylic acids that you’ll need to know for H2 A Level Chemistry:

Methanoic acid can be oxidised to carbon dioxide and water using

3. Reaction with ammonia and amines

Similarly, acyl halides can react with amines to form amides.

Esters also undergo alkaline hydrolysis to form the salt of the carboxylic acid and alcohol. If you have phenol instead of alcohol being formed, then the phenoxide ion will be formed instead, since phenols are acidic enough to react with alkalis.

Amines are bases, and react with acids.

Amides are reduced by LiAlH4 in dry ether to form amines.

Amides undergo acid hydrolysis to form carboxylic acid and the salt of the amine.

Amides undergo alkaline hydrolysis to form the salt of the carboxylic acid and amine.

Nitrile groups can be reduced to form amines using

Phenylamine can be formed from nitrobenzene by reduction.

Electrophilic substitution of the benzene ring of phenylamine

In phenylamine, the lone pair electrons on O in -OH group delocalises into the benzene ring, making the benzene ring more electron rich and as such more susceptible to electrophilic attack.

Knowing the reactions is just the first step for doing well in your A Level H2 Chemistry Organic Chemistry exam. You’ll need to know how to apply, determine structures from given reactions, distinguish various organic compounds from one another and more. But, without knowing these reactions well, it’s going to be difficult to apply these questions.

Hence, the first step to learn A Level H2 Organic Chemistry is to learn the reactions well.