Basicity of Amines and Amides – Explain and compare 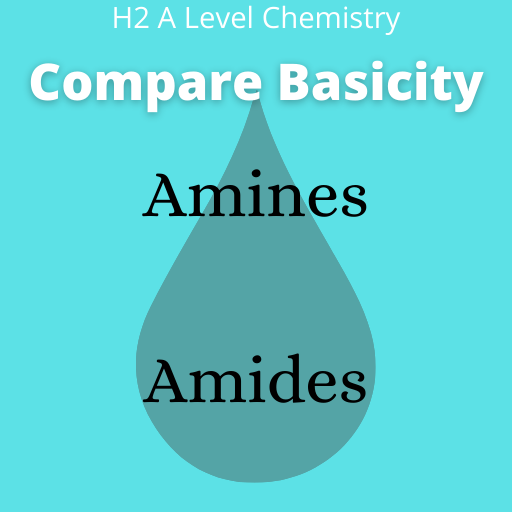 Explaining and comparing the basicity of amines and amides are often tested in H2 A Level Chemistry exams. In this post, let’s look at :

What makes a compound basic?

There are many definitions of bases. If we use the Bronsted Lowry theory, then a base is a proton acceptor. If a compound accepts a proton (H+) , it will be acting as a base.

Let’s use ammonia as an example.

Why are amines basic?

The lone pair electron on nitrogen in an amine is able to form a dative covalent bond with a proton. Since it accepts a proton, amines can act as bases.

Note: Every time an amine accepts a proton, the number of H bonded to nitrogen increases by 1, and the charge also increases by 1.

The basicity of amines is determined by its availability of the lone pair electron on the nitrogen atom to accept a proton. The higher the charge density, the greater the availability of this lone pair of electrons, and hence the more basic the amine is.

Why are amides neutral?

We have talked about amines for most of this post. In this post, let’s talk about why amides are neutral.

p/s: From past A Level exams, “why amides are neutral” is a common question tested in H2 A Level Chemistry.