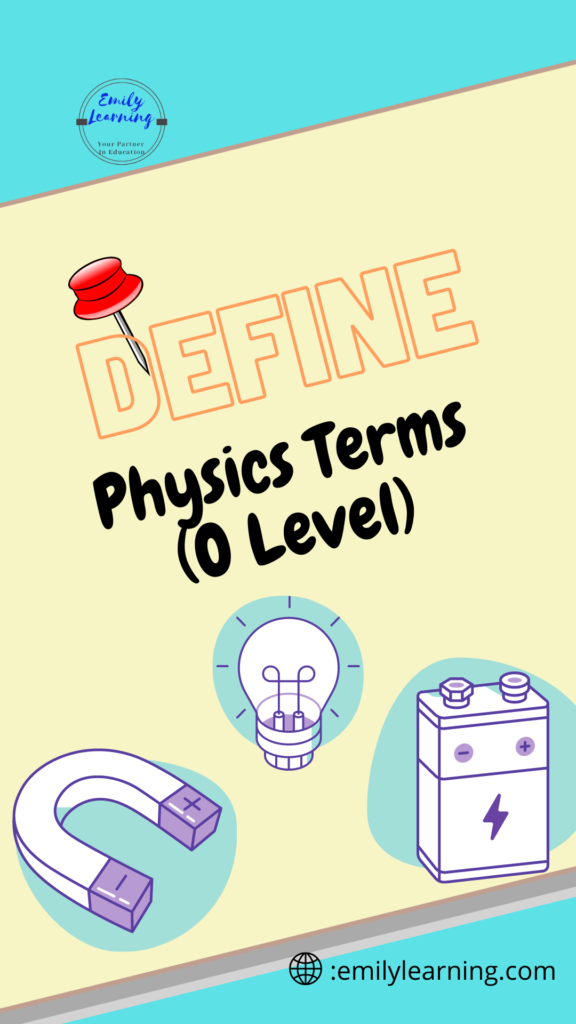 Definition questions for O Level Physics are usually worth 1 to 2 marks each. Although it’s just simply a regurgitation question, it’s a pain to many as such questions are just pure memorising, and in order to score, you’ll need to make sure you have the keywords in your answer. My advice for O Level students would be to keep this list with you, and memorise the definitions (or test how well you remember them) a few days before the exam.

In this post, you will find the common definitions asked for O Level Physics. Note that this is not an exhaustive list but should cover most of what you need (to define) for your exam.

I have classified all these terms that you need to define according to the topics. Click on the link below to go straight to the definitions in the particular topic.

Scalar Quantity: A scalar quantity is one that has magnitude but no direction. e.g. mass, time, distance, speed

Vector Quantity: A vector quantity is one that has both magnitude and direction. e.g. displacement, force, velocity, acceleration.

Speed: Speed is the rate of change of distance with time.

Velocity: Velocity is the rate of change of displacement with time.

Acceleration: Acceleration is the rate of change of velocity with time.

Newton’s First Law of Motion: Newton’s first law of motion states that every object will continue in its state of rest or uniform velocity if no net force acts on it.

Newton’s Third Law of motion: Newton’s third law of motion states that if an object A exerts a force on object B, then object B must exert of force of equal magnitude and in opposite direction back on object A.

Friction: Friction is the force that opposes motion. It only acts when an object is moving.

Mass: Mass is a measure of the amount of substance in a body.

Weight: Weight is the amount of gravitation force acting on a body.

Inertia: Inertia is the state that mass of a body resists a change in the state of rest or motion.

Moment: Moment of a force is equal to the product of the force and the perpendicular distance from the line of action of the force to the pivot.

Pressure: Pressure is the force acting per unit area.

Work done: Work done is the product of force and distance moved in the direction of the force.

Power: Power is the rate at which work is done.

Temperature: Temperature is the measure of the degree of hotness or coldness of a body.

Conduction: Conduction is a process where heat is transferred through a medium from one particle to another.

Convection: Convection is a process where heat is transferred by the movement of heated particles of a fluid.

Radiation: Radiation is a process where heat is transferred by means of infra-red radiation.

Heat capacity: Heat capacity is the thermal energy needed to change the temperature of the entire substance by 1 degree Celsius.

Speed: Speed of wave is the distance travelled by the wave over the time taken.

Frequency: Frequency of the wave is the number of oscillations per unit time made by a particle of a wave.

Wavelength: Wavelength is the distance between two successive points on a wave that are in phase.

Period: Period is the time taken for a particle of a wave to complete one oscillation.

Amplitude: Amplitude is the maximum displacement of a particle from its equilibrium position.

Wavefront: A wavefront is an imaginary line or curve that joins all adjacent points of the waves in the same phase.

Refraction: Refraction is the bending of light rays as they pass from one optical medium to another and undergo a change in speed.

Focal length for a converging lens: Focal length is defined as the distance from the optical centre of the lens to the focal point on the principal axis.

Ultrasound: Ultrasound is sound that has a frequency greater than the higher limit of the human audible range i.e. 20000 Hz.

Current: Current is the rate of flow of charges.

Ohm’s Law: Ohm’s law states that the potential difference across a conductor is proportional to the electric current passing through it, provided that its temperature remains constant.

Fuse: A fuse is placed in the live wire so that if there is a fault in the circuit, and the current exceeds the fuse rating, the fuse melts, and stops the flow of current through the circuit.

Live wire: A live wire is connected to the high voltage supply and allows current to flow through and reach the appliance.

Neutral wire: A neutral wire is connected to the 0 Volts supply and allows current to flow back to the source and hence completes the circuit.

Knowing the definition is only a small part of the O Level Physics exam. We go into detail what you need to know, and how to apply the concepts in our O Level Physics courses. Find out more here.